History of The Grand Republic

The Grand Republic was founded by rebellious regions of the former "NottaLottan Empire" (notably the Commonwealth of Lavrasia) on May 29, 2013. For over one year, Delveran independence was unknown to the NottaLottan government, with which Delveran officials did not maintain contact. This early period of Delveran history was marked by extreme isolationism and secrecy, though slow progress was made in developing a government framework and the Delveran Armed Services. By July 2014, First Consul Brizendine decided to reach out to NottaLotta Acres, which accepted Delveran independence. Late 2013 through 2014 was marked by a slow decline in all of the Provinces except for Lavrasia, resulting in the dissolution of Altaria and a leadership and activity crisis in Avannia.

In early 2015, Brizendine began a new initiative to revitalize the stagnant nation. This involved a series of internal reforms and the expansion of Delvera's online presence, culminating in the Grand Republic joining the MicroWiki Community on June 13. This growth spurt saw the establishment of the Provinces of Colo and Germanija, the creation of the Lavrada Bannerman, the large-scale opening of diplomatic relations, and the revitalization of the military, among other achievements. The first official election was held in August, legitimizing Brizendine's and Nikias Wernher's positions in the Consulate.

Late 2015 saw Dylan Callahan, former Secretary Secretariat of NottaLotta Acres, apply for citizenship. A wave of ex-NLA immigrants followed over the course of the next few months. In December, Callahan founded the Military District of Neosho amid some controversy.

In April 2016, Brizendine began reorganizing his cabinet. In May, newly appointed Minister of Commerce Callahan initiated the Callahan Plan, a strategy to increase activity and government functionality, as well as jumpstart the economy. Despite minor setbacks, the Plan was initially successful. After Nikias Wernher's victory in the July 2016 Consular Election, Delvera entered into a period of almost total inactivity (referred to as the Wernher Activity Crisis) for nearly two months, before reemerging in early September with a renewed burst of military, diplomatic, political, and economic activity. 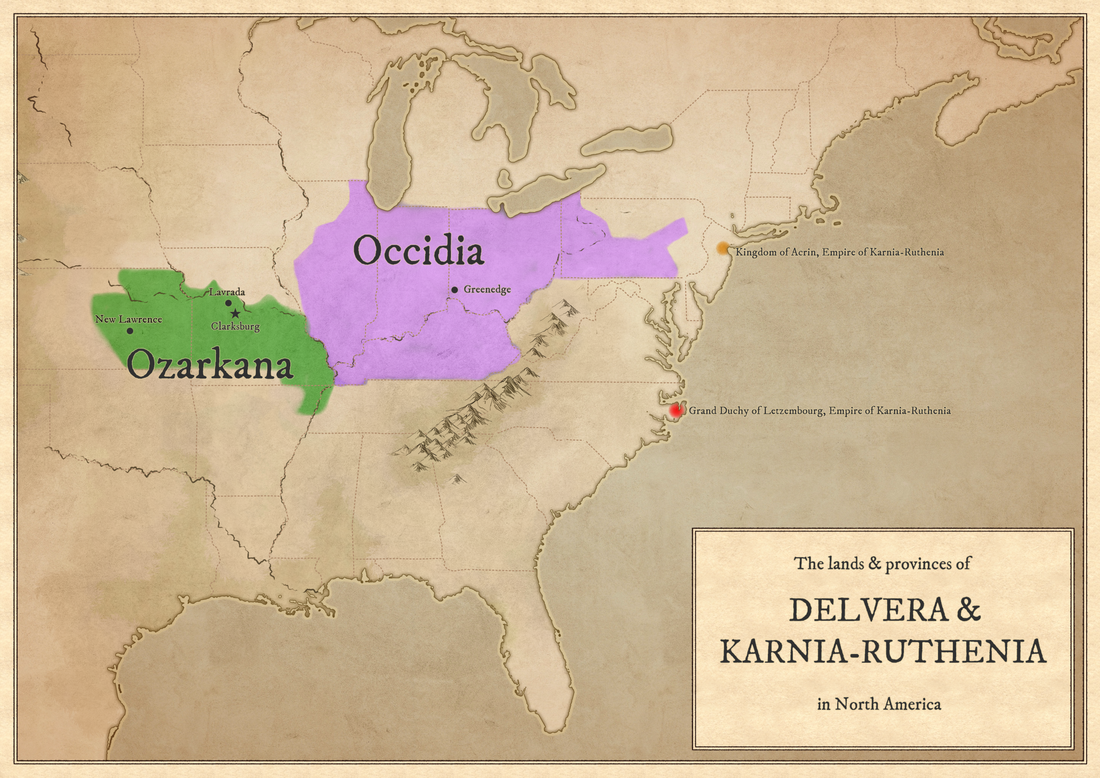 The Delveran "Sphere of Influence" is the geographical area not necessarily controlled by the Delveran government, but within which the Grand Republic claims micronationally cultural, economic, military, or political exclusivity. This area is the object of focus for the settlement, development, and expansion efforts of the Confederal government. Also shown are territories owned by the Empire of Karnia-Ruthenia.
​The Culture of the Grand Republic of Delvera is primarily Western in origin, drawing predominantly from that of the United States, though elements of alternate origin are present as well. The early provincial cultures of Lavrasia and the Altaria, ultimately that of Neosho, and thus the collective culture of the Grand Republic, were heavily influenced by that of NottaLotta Acres.

As there is, of course, no national standard for any elements of culture, many differences are present between the various regions of the Grand Republic.  The government therefore encourages this in order to promote diversity and regional identity.

The official language of Delvera is English.  German and Mandarin Chinese are recognized languages, due to the fact that several Delveran citizens study and speak these tongues. They are not used in any official proceedings, but efforts have been made to expand their use, such as translating signs and informational texts.

Many Delverans are students of art, drama, and music. Several citizens of the Grand Republic are skilled at singing, drawing, acting, painting, and songwriting, among other disciplines. Such individuals are encouraged to demonstrate their talents every year during the Delveric Heritage Festival.

An example of the artistic ability of a Delveran citizen can be found in "Oh, Fatherland", Delvera's national anthem.